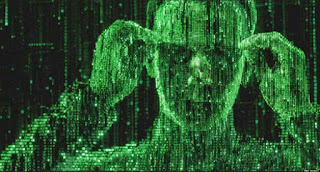 I decided to do a light and fun post this week. Not everything has to be “serious” all the time… We are allowed having fun with the work we’re doing too. This week is ‘The Matrix‘ Appreciation Week. At least in my universe it is… If you haven’t seen ‘The Matrix’, do yourself a favour and watch it. I watched it the first installment when it originally came out, with no clue of how ‘in your face’ it was, parading around as a Box Office science-fiction smash hit when in truth it’s actual genre is more ‘Science-Fact’.

That movie premiered on big screens around the world and millions of people flocked to see each installment, and as a young 20-year-old, my friends and I thought ‘The Wachowskis’ had the most incredible imagination ever for coming up with such a fantastic storyline.  The plot would thicken with each installment of the trilogy and it would just get more and more mindblowing and everyone raved about how ‘cool’ the movie was with Neo being able to dodge bullets, and then not having to because when he believed in himself enough, he would be able to stop them with his mind. Yet still, I had no idea of the profound work The Wachowskis were actually doing. To the unawakened [third] eye, The Matrix and its messages were lost.

And then, many years later, I decided to watch it again and my jaw dropped. At that point I had learned about manifestation and that I am responsible for creating my reality, and suddenly The Matrix Trilogy became the most enlightened masterpiece I’d ever seen in big cinema context, with every line being completely understood by my higher consciousness. With the exception of maybe the Rocky Horror Picture Show which is a gobsmacking tale of sexual awakening and expansion of consciousness that crawled out of 1975. I saw it the other day for the first time as an adult. I was shocked. I remember my grandfather watching that movie repeatedly and singing some of the soundtrack songs all the time in his house. Watching that movie has made me question my grandfather’s level of consciousness… although he’s no long er around.

Anyway, back to The Matrix. So, in the event you saw it when you were too young to get it (read: still plugged in), here’s a collection of quotes from the flick, for no other reason than to show you how so far ahead of its time the film was, and also, just for the fun of it. WHY NOT have a light and fun collection of quotes from a movie made in 1999? Also, if that’s the work The Wachowskis were doing in 1999, what level of consciousness are they at now? How may they have evolved in the 20 years since that movie they made  was released. I know how fast one can awaken and so am interested to know their level of consciousness now. Have they created anything recently that I should be aware of so I can watch?? I lapped up every minute of their series ‘Sense 8’.

Before I begin, for those in my audience who are not aware of this trilogy’s presence, The Matrix portrays a frightening future where humanity is unknowingly trapped inside a simulated reality called The Matrix, created by thought-capable machines to control humans while using their bodies as an energy source. While most humans plugged into the giant energy farms are running the simulated reality in their unconscious dream state, there are those plugged in who can sense something isn’t right and have a will to learn the truth and ‘wake up’. What follows when Keanu Reeves’s character Neo ‘wakes up’ is a breathtaking journey into self-belief and breaking through his own self-limiting thoughts to achieve the impossible. Sounding familiar yet??

The Matrix, 1999:
Morpheus: “This is your last chance. After this, there is no turning back. You take the blue pill – the story ends, you wake up in your bed and believe whatever you want to believe. You take the red pill – you stay in Wonderland and I show you how deep the rabbit-hole goes.”
****
Morpheus: “The Matrix is everywhere. It is all around us. Even now, in this very room. You can see it when you look out your window or when you turn on your television. You can feel it when you go to work… when you go to church… when you pay your taxes. It is the world that has been pulled over your eyes to blind you from the truth.
Neo: What truth?
Morpheus: That you are a slave, Neo. Like everyone else, you were born into bondage. Into a prison that you cannot taste or see or touch. A prison for your mind.”
****
Morpheus: “What is real? How do you define ‘real’? If you’re talking about what you can feel, what you can smell, what you can taste and see, then ‘real’ is simply electrical signals interpreted by your brain.”
****
Morpheus: “The Matrix is a system, Neo. That system is our enemy. But when you’re inside, you look around, what do you see? Businessmen, teachers, lawyers, carpenters. The very minds of the people we are trying to save. But until we do, these people are still a part of that system and that makes them our enemy. You have to understand, most of these people are not ready to be unplugged. And many of them are so inured, so hopelessly dependent on the system, that they will fight to protect it.”
****
Morpheus: “You have to let it all go, Neo. Fear, doubt, and disbelief. Free your mind.”

The Matrix: Reloaded, 2003
Ballard: You’re asking for one of us to disobey a direct order.
Morpheus: That’s right, I am. But we all well know that the reason that most of us are here is because of our… affinity for disobedience.

The Matrix: Revolution, 2003
Agent Smith: Why, Mr Anderson? Why, why, why? Why do you do it? Why get up? Why keep fighting? Do you believe you’re fighting for something? For more than your survival? Can you tell me what it is? Do you even know? Is it freedom? Or truth? Perhaps peace? Could it be for love? Illusions, Mr Anderson. Vagaries of perception. Temporary constructs of a feeble human intellect trying desperately to justify an existence that is without meaning or purpose. And all of them as artificial as the Matrix itself, although only a human mind could invent something as insipid as love. You must be able to see it, Mr Anderson. You must know it by now. You can’t win. It’s pointless to keep fighting. Why, Mr Anderson? Why? Why do you persist?
Neo: Because I choose to.
****
Neo: I just have never…
Rama Kandra: …heard a program speak of love?
Neo: It’s a… human emotion.
Rama Kandra: No, it is a word. What matters is the connection the word implies. I see that you are in love. Can you tell me what you would give to hold on to that connection?
Neo: Anything.

Not quite as cut and dry as some of us may have thought it was back then, is it? Have you watched the Matrix? Do you think it’s possible we’re really in a simulated world, with our consciousness trapped while our emotions and energy are used as power sources for something else? I often wonder that if not, why else would there be so many mathematical equations occuring throughout nature?? Perhaps it makes most sense that those equations are algorythms running in a machine somewhere….

I mean, I’m not saying it’s exactly as the movie depicts, but many of those quotes hit home way deeper than just the surface level understanding I had of them as a very young adult, and I very much do believe I create my reality…

Knowing what you know now, if you’ve already awakened, which pill would you choose? The blue pill or the red pill, and why?

Want To Wake The World? Then Wake Yourself

Be Yourself: You're Medicine For The World